“The Dark Place Reserved for Sin”: Sketches in Contested Aesthetics 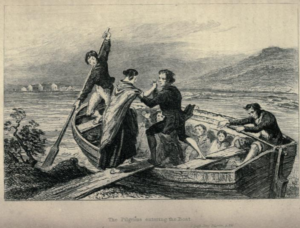 Pilgrims boarding the ferry. An etching for William Carleton, ‘The Lough Derg Pilgrim’, in Traits and Stories of the Irish Peasantry, 1843, public domain [http://archive.org/details/traitsstoriesofi01carlrich]

Welcome back! Today, I thought I’d spend some time parsing the aesthetic register of my source material and exploring some of the nuanced contexts in which it appears. I am experimenting with my material, so this is also an exercise in becoming more familiar with the Digital Derg collection and making my own research practices more open.

Seemingly dichotomous emotions abound within the story of Lough Derg – fear and hope, darkness and light, beauty and ugliness. They have been present in descriptions of Patrick’s Purgatory dating back to the earliest medieval accounts, and yet their register is more complex than a first glance might imply. The language of ugliness, for example, was extracted from this aesthetic ambiguity, and became a crucial trope of the Saint Patrick’s Purgatory legend.

The Spanish Golden Age playwright Pedro Calderón de la Barca captures this confection of themes well in his seventeenth-century play. His account, like many of Purgatory, is second-hand and based on a series of fanciful accounts such as Juan Perez de Montalvan’s 1627 Vida y Purgatorio de San Patricio, itself drawn from the 1624 Florilegium Insulae Sanctorum, seu vitae et Actae sanctorum Hiberniae. In the passage below, St. Patrick describes the Isle of Purgatory, inviting a sceptical party of nobles to see it with their own eyes:

Come with me
Through this mountain woodland drear,
Thou and all thy followers here,
Thou and they shall see therein
The dark place reserved for sin,
And rewards delightful sphere.
They shall have a passing view
Of a sight no tongue can tell,
An unending miracle,
To whose greatness shall be due
Their amazement ever new
Who its secrets shall unveil.
Yes, a perfect image pale
In the wonders guarded here,
Shall they see with awe and fear,
Of the realms of bliss and bale.

Awe and fear, bliss and bale: dichotomies and contradictions abound in the dark wonder ascribed to Station Island and its Purgatory. Purple 19th-century translated prose aside, the passage captures a complex received notion of place. For Pedro Calderón de la Barca and the sources that he drew inspiration from, the darkness of the location was a fitting backdrop to divine mystery, a thin place between life and death. The boat that took the pilgrim across the lake was his or her coffin, burying them in an experience of life and death, and a direct confrontation with their sin.

Later commentators such as the Anglo-Irish establishment figure-turned-Catholic Shane Leslie found beauty in the darkness. Leslie merges an austere form of beauty with the grim grey rock of Station Island, set within the steely waters of the lough:

On every side of the island lay the watery fields, winding themselves into inlets and across bays. Great sheets of water, unbroken save by a group of smaller islands that rode like ships that had run to seed and blossom in tropical seas, with the pine-masts budding over the green decks.
‘Mid these islands of southern sea lay the grim little rock of the Purgatory, without fruit or leaf. Two grey stoned chapels, surrounded by a few poor thatched cottages, marked the spot of the famous prison-house.

Members of the Protestant establishment were less charitable, equating the location with ‘Popery’, error, and ignorance. Leslie sought to shape a form of portentious austere sublimity from the unforgiving terrain of Lough Derg and its surrounds. Others sought to turn it to their own purposes, often dismissal or critique.  As William Carleton approaches the lake from the south, he narrates a scene of rhetorical disappointment:

The road from the village of Petigo leading towards Lough Derg, runs along a river tumbling over rocks ; and then after proceeding for a time over a boggy valley, you ascend into a dreary and mountainous tract, extremely ugly in itself, but from which you have a fine view indeed of the greatest part of the lower lake of Lough Erne…

Carleton, like many of his contemporaries, reads ugliness into the purpose of the place. To his eyes, it can only be a disappointment. Lough Erne is better, for it does not propose to be a site of special religious significance. Its waters are not stained by a pre-ordained agenda. Aesthetics are a function of ideology, and Lough Derg must always disappoint. Impressed, perhaps overly so, by its own wit and elocution (Carleton was 19 at the time of writing), the account continues by pointing out a disappointing lack of Gothic splendour. If a scene is grim and forbidding, it should at least be romantic. Celtic Christianity and Catholic pilgrimage seem forgivable to Carleton if they are impressive – a cathedral or a monastery. A lonely lake set in an enfolding circle of hills is a disappointing punctuation of an otherwise rural landscape:

A person who had never seen the picture that was now under my eye, who had read of a place consecrated by the devotion of ages, towards which the tide of human superstition had flowed for twelve centuries, might imagine that St. Patrick’s Purgatory, secluded in its sacred island, would have all the venerable and gothic accompaniments of olden time : and its ivied towers and belfried steeples, its carved windows, and cloistered arches, its long dark aisles and fretted vaults, would have risen out of the water, rivaling Iona or Lindisfarn ; but nothing of the sort was to be seen.

Rev. Caesar Otway of the Church of Ireland, onetime influence on Carleton’s disdain for Lough Derg – is less charitable still. The practices of Lough Derg made an easy way to criticise the entire Catholic establishment and its sacred sites through this example. When religious changes swept Ireland, Station Island was always a prominent punching bag. For Otway, the powerful contempt felt for Catholic practice and contrary belief hangs upon the landscape like a shroud, making it appear tawdry and ugly:

In a short time I arrived at the island, and as stepping out of the boat, I planted my foot on the rocks of this scene of human absurdity, I felt ashamed for human nature, and looked on myself as one of the millions of fools that have, century after century, degraded their understandings, by coming hither … altogether I may briefly sum up my view of this place, and say that it was filthy, dreary, and altogether detestable—it was a positive waste of time to visit it, and I hope I shall never behold it again…

~Caesar Otway, Sketches in Ireland: Descriptive of Interesting, and Hitherto Unnoticed Districts, in the North and South, 1827 edn, pp. 154

Otway sought to deter visitors to a site that was religious anathema. His writing drips with a kind of condescending glee, inviting his Protestant readership to soak up the follies and shortcomings of the site.

Before anything constructive could come from later efforts at a growing rehabilitation of pilgrimage in the later 19th century, the earlier slurs on Lough Derg’s reputation had to be addressed. Catholic commentator Daniel O’Connor sought to repudiate this perspective when shaping his influential pilgrim guide. He could not approach the topic without attentiveness to the negatve stereotypes he encountered. His critique is to the point:

The Rev. Caesar Otway, in his Sketches in Donegal and other writers after him, from whom we should expect a more impartial description, if not so graphic, say that there is no grandeur in the scenery of Lough Derg, no variety in the outline, the mountains without elevation, neither tree nor green spot to relieve this sombre scenery. A more unfair or distorted picture the greatest enemy of the place could hardly give. Here, indeed, you have all the charms of Highland scenery, and much in addition. The extensive sheet of water, with rocky shores and numerous islands, is all that can be admired.

O’Connor recognises the rhetorical mobilisation of ugliness by his narrative rival, and seeks to remediate. Grimness of landscape is in the eye of the beholder. The highlands of Scotland present a similar scene, and yet they are romantically lauded. The Yorkshire moors are bleak, and yet they are the site of beauty.

During the Celtic revival of the late 19th and early 20th centuries, commentators like Leslie tried to rehabilitate and refashion ugliness, to make it strength and inner beauty. Their twenty-first century legacy reflects all of these facets. The waters of the lake have absorbed monsters, myths, scorn and beauty in equal measure. As Leslie put it, “Year by year the Gaelic heart turns thither, as the magnet to the north, and pilgrims come across the division of the seas. The sighs of dead generations are heavy in the air, and the very stones are steeped with their prayers. On the red tideless water is writ the destiny of Ireland.”

Unattractive, unrelenting, unfunny: ugliness is often defined in distinction to beauty, humour and ease. One cannot avoid the word or its synonyms when reading accounts of Lough Derg in my collection. Squeezing positive emotions from the unyielding waters of the lake and its surrounding topography was a labour of love for some and penning pure vitriol for the same place the domain of others. The Protestant establishment sought to tear the pilgrimage down with the glee of a restaurant critic, while an oppositional Catholic voice sought to remediate, historicise, and spiritualise.

My project is already applying the first layers of a thick description onto its map, providing competing narratives side by side and shaping a vision of the spiritual waterscape that is a prism of perspectives. This blog will help me to spin stories from the material as they emerge, perhaps stories that might not be prominent in other accounts of Station Island. The story of Lough Derg is the story of Ireland, and no visitor comes unburdened by pre-existing ideology. The more perspectives compete for space on the map, the more emergent stories it will tell.

[Header Image: An etching for William Carleton, ‘The Lough Derg Pilgrim’, in ‘Traits and Stories of the Irish Peasantry’, 1843, public domain]