“Those trackless hills enfold the lake as though to hide it”: Rural Isolation and Waterscape 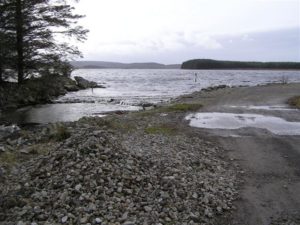 Hello all. Today I am sharing some material from an article draft I am working on for the Digital Derg project. The article will be accompanied by a Neatline companion essay on my newly-hosted Omeka site—currently set to private, but coming soon—and I will share this when it’s ready for pre-publication spatio-temporal open peer review! In the interim, do let me know if you have any ideas or suggestions.

It is remarkable how completely the exterior world is shut out. Those trackless hills enfold the lake as though to hide it. The nearest railway station is four miles away. Despite the ancient and enduring interest that invests this place, it has never attracted any permanent dwellers. The barren soil seems to forbid the formation of homesteads on it. (Alice Curtayne, Lough Derg: St. Patrick’s Purgatory, 1944, p. 2)

Alice Curtayne’s 1940s depiction of Lough Derg is consistent with a long history of individual and community emotions and affects build around the four foundations of isolation, water, aesthetics, and religious practice. As a Catholic and as a scholar, Curtayne glosses the lake with a romantic aura of unyielding isolation, rugged austerity, and purity uncorrupted by modernity or secular life. As Richard Scriven has discussed, the liminal positioning of Station Island within the lake is intrinsic to its transformative pilgrim experience.

The lake carries with it the contours of isolated emotionality, its hydro-social relationship to the lake itself, and the entanglement of water, emotion, and place in a fiercely contested political ecology and geography at the heart of Irish identity or, more appropriately, identities. The plurality of forces at work across the contours of a singular space to shape many places creates an even greater plethora of subjectivities, as well as a multiplicity of waters rooted in different knowledges of the lake and its surrounds in the Parish of Templecarne.

When Rev. Henry Newland visited the lake with companions for a spot of casual fly-fishing, he responded to the resonant aura of cultivated and occasionally aggressive isolation that he expected and encountered. Prepared for a particular affect by years of stories, he experienced the lake as a place of barren beauty and of sparse isolation both satisfying and depressing in equal measure. He, like many before him, was both charmed and chastened. This was a place for isolation, prayer and self-denial, not a rural idyll for casual sportsmanship:

Lough Derg has certainly been well chosen as a spot of religious penitence and seclusion, for the character of its scenery harmonises well with such a feeling; it is that of wild and gloomy loneliness. (Rev. Henry Newland, The Erne, Its Legends and Its Fly-Fishing, 1851, p. 220)

Newland continues, laying out a scene that is beautiful, but lacking in features of interest. It is a world of stone, simple flora, flat water, looming hills and enclosed seclusion. Wildness predominates:

There are no trees to be seen, and very little cultivation of any kind. It is surrounded by heavy, round-headed mountains, or rather gigantic hills, covered with heather, which, with its red stalks and purple blossoms, casts a dull, dusky, red reflexion on the water, and gives to the lake its name. There are a few islands besides the Purgatory, and these are not without their beauty ; but they are still of the same wild, savage character as the coasts, — rocky, heath-covered, and abounding in myrica and arbutus. (Rev. Henry Newland, The Erne, Its Legends and Its Fly-Fishing, 1851, p. 220)

Religious affects and emotions shroud places in spiritual significance, but it can be harsh rather than gentle, all hard edges, rough stones, unforgiving weather and bleak profundity. When the place is defined by an intimate relationship with a body of water and the motions of a hydrology, these forces take on unique resonances. When the setting is remote, placed within a rural corner of County Donegal with an out-sized spiritual reputation, the picture complicates further. The complexes and communities of affect and emotion aroused by spiritual landscape can be intense—a powerful joy or a violent hatred—or more quotidian—unease, disgust, hope, satisfaction. They jostle against each other, vying to occupy the same place and space, and mingle to make a complex socio-natural ecology.

A striking image appears in an account of Rev. Knox’s visit to Station Island outside of the pilgrim season. Expecting to find emptiness and moral bankruptcy, he seems curiously affected by the vision that greets him. Without the hubbub of the crowds, the island is empty and its rural isolation returned, with only a sea of rags remaining, corporeal traces of the crowds attending the Purgatory:

…All was as still as death save that on one or two wave-worn rocks sat as many old women telling their beads with exemplary devotion… The Chapel was deserted and the altar removed: nothing remained to commemorate the recent presence of a multitude but an incredible quantity of rags scattered here and there in indescribable confusion over the whole surface of the Island. (Rev. James Spencer Knox, Pastoral Annals, 1840, in Leslie, Shane, Saint Patrick’s Purgatory: A Record from History and Literature, 1932, p. 135)

Once this episode ends, Knox returns to stridently railing against the corruption of the Catholic Church and its rites, but the red lake itself makes a curious dent in his theologian’s armour as he is sailed around its waters, finding a vista of encircling hills “brown and barren on their summits: but [where] crops waved and green grass grew and both continually ascending the gently sloping sides testified to the successful progress of human labour”. The haughty anti-Catholic seems subdued, if only for a moment. Enough, at least, to remark on it in his Pastoral Annals at length.

The crucible of the lake shapes mentalities, and its waters work upon the observer. The lake provides a framework for and shape to emotional topographies, but also complicates their meaning even further. Bodies of water such as Lough Derg and its archipelago of land-locked islands can be dense loci or points, drawing in emotions. To their interpreter, they form shapes and patterns: a line, inscribed and re-inscribed along an itinerary of points from place to place, wearing a groove in the cultural memory of generations. To the eye of a geographer or historian of landscape, they might also take the shape of a polygon, a zone, a natural or man-made shape stamped on the land by artifice or deep time process.

Emotionally-coded geographies move with the contours of social and natural patterns, following the line of a long-frequented or scarce-remembered itinerary. They endure in the face of fading memory, mingling with vastly differing temporalities to make a place spiritual and resonant. The fact that they exist within rural landscape is intrinsic: although bodies and ideas flocked to the shores of the lake for centuries, they must exist “out there” away from city, town or busy road. Just as medieval monastic orders such as the Cistercians aggressively carved out monastic sites that were wildernesses of the mind for their spiritual thought to thrive and later increasingly urban orders such as the Carthusians recreated wilderness in their often urban priories, so too does the spiritual story of Lough Derg demand isolation, a hermetic and austere environing of an oft-interrupted but long-standing place of pilgrimage.