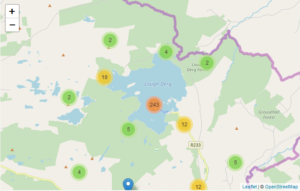 Today I would like to share the text of a talk I gave last week at the 5th International Irish Narrative Inquiry Conference. This year’s conference at Trinity College Dublin was on the topic of ‘Exploring Creativity in Narrative Inquiry’. It was a great conference, and I learned a lot. My session, organised by Dr Jessica Foley, was on the topic of fiction as orienteering in an age of smart technologies.

The primary assertion of the narrative inquiry methodology is that people’s stories matter, not only the content of their interviews with social scientists and qualitative researchers, but the medium and format of their expression. The narrative of the researcher also matters, and the medium by which stories are shaped into research. The manner in which human beings tell their stories is as important to researchers as what they say. I spoke about deep mapping, spatial humanities, and the desire to provide a medium of narration equal to the task of exploring place at the level of detail required for this project.

On to the paper!

My project is to trace the cultural, spiritual, and hydro-social contours of Lough Derg in County Donegal. It explores the relationships and entanglements between lake, pilgrimage, and surrounding bioregion through an intuitive sketching out of detail. This results in an ingesting of content into Omeka, a collections management system. I map deeply and digitally, finding my way by the trails made by others, their curation of material, their obsessions. The lake is a lodestone of Catholic Irishness that draws narratives, ideas, and subjectivities to it.

As a historian of water, I often go with the flow, following contours and histories that move with the aqueous contours of the land. Predictably, I get lost a lot. When this happens, I find myself inspired by an analogue pioneer who navigated these methodological waters before me.

When William Least Heat-Moon published PrairyErth: A Deep Map in 1991, he delved so far and so deep into rural America that it enveloped him. The chapters of the book – considered both strange and powerful at the time of release – draw on an intermingled sense of identity derived from both European and Osage First Nation ancestry to tell the story of Chase County, Kansas. Each chapter begins with a commonplace book, bombarding the reader with juxtaposed perspectives, snippets, ideas and descriptors. It merges settler colonialism, the knowledge of first peoples, time and place. The essaying begins, sketching out the intimate details of the prairie, winding from place to place and setting out an intimate itinerary.

The book is the work of over a decade, the compendium of an identity set out and explored on paper. Its intimacy is extraordinary, as is its eye for detail. PrairyErth inspired a generation of academics to deep map for themselves, with geographers, literary scholars, historians and anthropologists and a broad assemblage of other scholars answering the call. It is hard to overstate the impact of the work on the spatial humanities. Deep mapping takes its inspiration from the situationists and their urban Dérive, what Guy Debord describes as when “one or more persons during a certain period drop their usual motives for movement and action, their relations, their work and leisure activities, and let themselves be drawn by the attractions of the terrain and the encounters they find there”.

I find myself wandering, semi-lost but purposeful, in a new landscape and with new questions. My Irish Research Council-funded postdoctoral project gathers a variety of cultural and scientific material into a deep map of Lough Derg in County Donegal, site of St. Patrick’s Purgatory and a well-known pilgrimage site for generations of Catholics. It is part of the Irish psyche and contains a reservoir of spiritual history waiting to be delved. As Jamie Linton puts it, ‘[w]e mix language, gods, bodies, and thought with water to produce the worlds and the selves we inhabit’. I have argued that there is a need to provide histories that reveal this admixture in greater depth and make it accessible to a variety of interpretations.

The project builds a vision of water spanning Ireland’s long spiritual history that will strengthen the cultural resonance of place and space in the face of unprecedented bio-ethical, heritage, environmental, and climate challenges. The methodology, like that of PrairyErth, is deep mapping, the capture of a wide range of spatio-temporal material focused on a small geographical area. The final result will be an online archive consisting of literary, social science, natural science, and multi-media collections.

The digital resource will contain some 1000 objects and be publicly available. Users will be able to make their own paths through the material and tell their own stories. I hope they share them with me. I am also writing my own essays and telling my own digital stories. Like all deep maps, it captures stories, places, objects, ecologies, environments, animals, plants, movements, changes and disruptions, gathered together and juxtaposed. The technology sees the items within my collection as the same, ontologically flat in a manner described by Selina Springett in a 2015 essay on the democratisation of knowledge through deep maps. They are cultural boundary objects, belonging to many different categories. They are a narrative democracy of objects.

My digital storytelling is underway. In one soon-to-be-published effort (watch this space), I trace the tragic 1795 journey of a group of 90 pilgrims drowned in the lake a few miles from land. In another, I explore the contested affects and emotions of nineteenth-century Catholic and Protestant commentators disputing the valences and meanings of the place. To some, it was a miserable and idolatrous waste of human labour. To others, it was a symbol of a renewed post-Ascendency Catholicism and the seed of a new Irish identity. There are hundreds of other spiritual and aqueous histories to be told, an inexhaustible reservoir of potential qualitative research paths.

Likewise, the tools of orienteering within a world of endless material need to survive the indignities of hard use. First, an environment in which to arrange and present the facts. For Least Heat-Moon this was simply his memory and copious notes, for me it is Omeka, the cultural heritage management system. My frame is made possible by the proliferation of elegant and easy to use content management systems for cultural heritage and their many plugins. Secondly, a compass is required. There is no clear path through this information, and none is desirable. For PrairyErth, each journey was personal and subjective, a collection greater than the sum of their parts. For me, ontologies, metadata attributes and keywords are my guides. I search and search and search, looking for correspondences. I essay these trails. Once again, the digital humanities are my guide and my tool. Thirdly, the deep mapper requires a mode of narration, a storytelling conceit or device.

Many of the tools designed for visual storytelling use the language of orienteering. Neatline, an Omeka plugin that allows visual storytelling, speaks of waypoints. It sees itself as a guided itinerary through the material of the user. The tools of twenty-first century digital humanities provide a frame for finding the way and telling a compelling story, but will they survive research reality? Will they encourage one form of storytelling, but ignore another? The affordances of a technology and software-rich world are manifold: GIS, remote sensing, digitisation, machine readable texts, metadata, linked data. A liturgy of tools. But are they also a liturgy of limitations? Part of my project is coming to terms with the modes and affordances of deep mapping within a digital world, retracing the steps of books like PrairyErth while making new paths. My project book will be a compromise of narratives, affordances, limitations, technologies, ideas and influences. Its stories will be part of a much larger navigation.