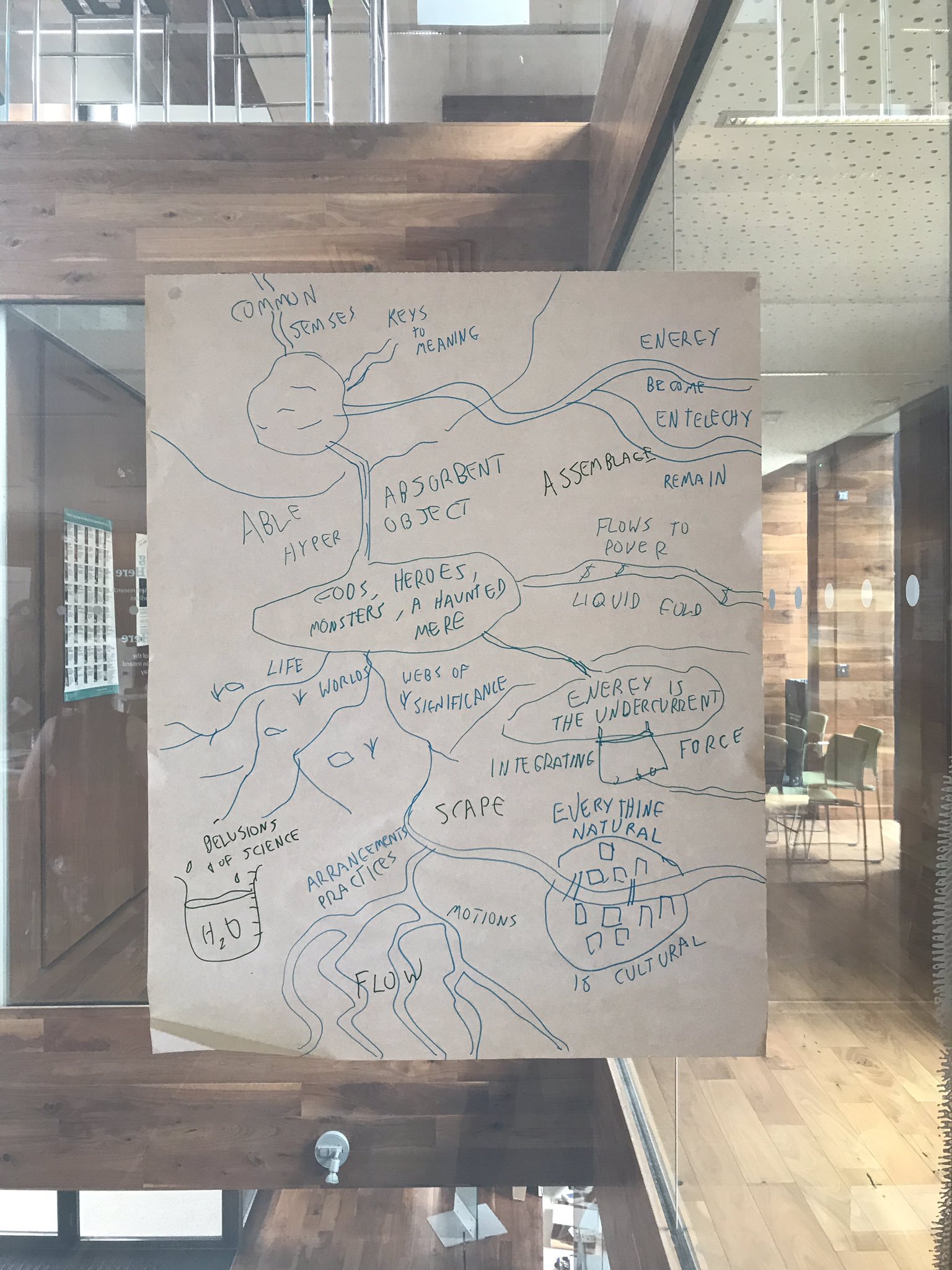 Today I’d like to share draft material from an essay I’m writing on the Lake as an Archive, both of memory and of environmental humanities. In November I’m very much looking forward to a two-week trip to The Greenhouse environmental humanities programme at the University of Stavanger in Norway to work on this topic. What you see here is my quasi-creative writing musings, which I am refining and building up with the contents of my deep map of Lough Derg (as a case study) and scholarly readings.

Enjoy the chaos of half-formed ideas, and read on!

Water is culturally absorbent. It takes ideas, events, emotions and experiences into itself. It is an immersive archive that conceals and controls, a filter that remediates and renews, and a vision of other possible worlds and knowledge(s). What is it that are we looking at when we gaze into water and imagine that we understand it as a comprehensible history? Is it a reflection, or a glimpse of something deeper? Waters are archives, and the content that they contain returns to trouble and remind the present. Much of the memory of water is of trauma: drownings, dissolutions, ruinations, concealments. I am exploring the archival qualities of a case study body of water and its digestion and regurgitation of cultural trauma. Nothing deposited in the cultural memory of a lake ever truly goes away, reoccurring in memory and social life with the shifting of political ecology and expressed through a prism of modes.

Lough Derg in County Donegal is the site of Station Island, which is itself home to the Sanctuary of Saint Patrick, which is itself the encapsulation of Patrick’s Purgatory, a centuries-old thin space between this world and another, where the torments of hell could be glimpsed by those still living, and sins be forgiven. It is a place of circuits. Literally, in that it is the site of an annual pilgrimage that consists of a multi-day series of movements, prayers, embodied experiences and cycles. Figuratively, or through the eye of the deep mapper, for it is a place where water, culture, accumulated time, archived environmental experiences and an archaeology of pilgrim mentalities gather in dense clumps, gravitating to hot spots of human movement across land and water. Spaces nest in spaces which are in turn the containers for more spaces, and places teem within them. The case study stores centuries of sectarian trauma within its waters and encrusted on its shores, always ready to re-emerge.

To encounter the lake is to enter an atmosphere. It is a bubble with its own rules, changeable and evolving and yet asserting its eternal nature. It is an archive of places and spaces, nestled together in ever-diminishing containers. Each evokes a different affect, a different experience. Scales of engagement vary. Within the bubble, goes the story of those who dwell there, the cares of daily life recede. By bathing in the insular pilgrim affect of the lake, it is possible to reach out and connect. This encounter aesthetic is well understood by the custodians of the site. Storytellers of place apprehend its significance, manipulating the repository of memories. Like the editing of stored data and the management of permissions in an archive, the human components of lake memory perform tasks of curation: reading, responding, writing, poetics, cultural memory and folklore. Memories of pain leave a deep impression upon the archive, readily retrieved through affective engagement. Their storage, access and retrieval is a process of painful socio-natural interaction, of an extended cognition and memory system tied into the aqueous environment and its surrounds.

Archives are about preservation, but they are also arbiter of authority. They raise inevitable and often timely questions: Who curates? Who interprets? Who decides the criteria? The same is true of an entity such as a lake. Water history—and religious history, for that matter—are about authority. The question of who curates, who interprets and who decides is a matter if intense debate. The social meaning of a body of water is only ever partial, revealing different facets to different communities and individuals. There is a commons of knowledge within water, but there is also a pervasive tragedy of the commons. Exploitation, overuse, degradation, pollution, intensive agriculture: all of these activities degrade the storage capabilities of water. Approaching a lake and asking it to remember and approaching a lake and asking it to yield to scientific query are based on a similar conceit: that humanity thinks with and knows with water, and through it.

Lough Derg consists of accreted layers, centuries upon centuries of stories. Pilgrims have sailed, walked, rode and driven across the face of Europe and across Ireland. When they reach its shores, they pause and take it in. There is a vocabulary for this experience. It is in the steely wave-tossed waters. It is in the waiting purgatorial isle, a boat ride away. It is in the distant slopes of the Blue Stack mountains. Experiences converge to make place from space as time emerges from eternity. When seeking eternity and timelessness, we experience layer upon layer of embedded time instead. It hums in the air, swirls in the water. The traces of human activity and their effects trace ephemeral outlines. They span time, space, culture and knowledge. The environment traces its effects on human visitors in turn, encountering them. It is the substrate for a storied and fragmentary identity. Or, more accurately, so many identities in the plural that they are scarcely intelligible.

The affordances of water and shore, biodiversity and topography feed into the corresponding patterns of human activity in the form of written and built heritage, non-representational geographies such as movement across landscape and its patterns, and embodied practices captured in text or memory. The two are co-created and endlessly reciprocal. Scholars call this reciprocity socio-nature. It exists at the linchpin between a human and natural world that has no borders. It soaks up ontologies, an archival receptiveness to the stories of centuries, coloured and nuanced by a distinct sense of space and place and imperfectly re-examined and re-inscribed for every time. It has taken on a digital life in the age of open data, picked out in the ephemeral language of the many projects seeking to preserve Irish heritage. Each movement is a case study based on the observations of a visitor to Lough Derg. The lake attracts admirers drawn by faith, but also by a complex of other motivations: curiosity, disdain, imagination, yearning, pride.

For urban imagination, the prism of the weird must be sought in the spaces between spaces. Weird fiction/magical realist tales such as Neil Gaiman’s Neverwhere (1996) or China Mieville’s The City and the City (2009) make this abundantly clear. This is also true of rural place and space, and yet the very act of arriving at an imagined peripheral and being drawn into a new centre is a break from the normative. To encounter Lough Derg is to fall into it. Its meaning is impenetrable from the outside, a cool dark expanse. It suggests activity below the surface, but emerges and reveals itself to the visitor. It teems with memories and stories, monsters and fish, razor sharp rocks and ideas. At its heart lies Station Island, eye of the storm. On this cramped space, centuries cluster. They impinge from the boundaries, a restless parliament of ghosts. They whisper in soft tones of meanings, mysteries and mythographies. They cling to material culture, suggesting that quantitative methods are insufficient. A story defies counting and measuring, adhering to space with distrust. Despite the positivist tendencies of some perspectives, folklore eschews neat timelines and genealogies.

Irish identity is an act of conjuring, coaxing the weight of the past into the present through the ruptures caused by centuries of war, colonisation, demographic disruption and heterogeneity. The confected vision of Irishness seems as solid and monolithic as it is luridly green and orange: an essence of Aran Island woolwear, celtic knotwork, the claddagh ring, leprechauns, folk music and folklore. It is a vortex of nineteenth-century Celtic revival dreamings, twentieth-century post-independence aspirations and twenty-first century branded geniality. And yet, a closer look—dare I say a deep mapping—of this monolith reveals both an adaptable flexibility and a remarkably brittle substance. Irishness both perpetuates and strains against this status quo. Ireland is more but hides beneath its romance like an iceberg. If we glimpse behind the shadow play, we see spaces upon spaces, places upon places.

Deep mapping Lough Derg is a blunt force trauma to normative space, a blow that crazes and shatters the reflective veneer of Ireland, revealing its inexhaustible vitality. Entering the lake as archive is entering the watery maze of internal contradictions and subtleties. What it retrieves is as complex and partial as what was deposited.